The Honourable Kent Hehr, Minister of Veterans Affairs and Associate Minister of National Defence, and members of a Canadian delegation marking the centennial anniversaries of the Battles of the Somme and Beaumont-Hamel today attended a remembrance ceremony at the Canadian National Vimy Memorial. Minister Hehr then joined Vimy Foundation student alumnus Xavier Delporte in viewing progress on a new Visitor Education Centre. The centre is scheduled to open April 2017 as part of commemorative events to mark the 100th anniversary of the Battle of Vimy Ridge. 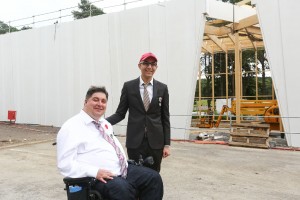 Minister Hehr congratulated the Vimy Foundation for raising $5 million in support of the new Visitor Education Centre. This matches the Government of Canada’s commitment and brings the project’s total budget to $10 million. To mark his first visit to the monument, Mr. Delporte presented Minister Hehr with a Vimy Pilgrimage medal.

“The Government of Canada thanks the members of the Vimy Foundation for their commitment and for their leadership in ensuring Canada’s legacy of remembrance continues. This new centre will help us share the stories of those who bravely served during the First World War and provide visitors with insight into why the Canadian National Vimy Memorial is such an important symbol for our country.”

“We are very thankful for the support of corporate Canada and the charitable foundations, philanthropists and individual Canadians whose generous contributions have helped us reach our ambitious fundraising goal. We join the Government of Canada and all Canadians in anticipation of the opening of the Visitor Education Centre and commemoration of the centennial of the Battle of Vimy Ridge in April 2017.”