Due to the difficulty of quarrying such large slabs of stone, as well as its extensive shipping route, the first shipment of Allward’s selected Seget limestone did not arrive in France until 1927. In an effort to keep his workers busy, many of whom were French and British veterans, Canadian military engineer Major Unwin Simson decided to preserve a section of trench lines that had been slowly deteriorating since 1918. Workers reinforced the German and Canadian lines near the Grange crater group by filling sandbags with concrete and re-lining the dugout walls. A portion of the Grange Subway was also excavated, a concrete entrance poured, and electrical lighting installed. The opportunity to experience these preserved trenches and tunnel systems at the Vimy Memorial today can be largely attributed to Major Simson’s efforts.

As part of the Vimy Foundation’s Vimy: Canada’s Coming of Age week at Encounters With Canada, students attend a candlelight vigil at Beechwood Cemetery in Ottawa (the cemetery contains the graves of 212 Commonwealth casualties of the First and Second World War). Writing of the candlelight vigil, Molly reflected: “Our ceremony in the cemetery was incredibly influential and eye-opening; the grave I stood at was of a 17 year-old which is the age of many of my friends, and so it was very difficult for me to imagine one of them fighting and dying for our country at such a young age.”

Each Friday, we will revisit an interesting poll result from the past few years. How do you compare to other Canadians? See our past poll results here: (http://www.vimyfoundation.ca/learn/poll-results/) 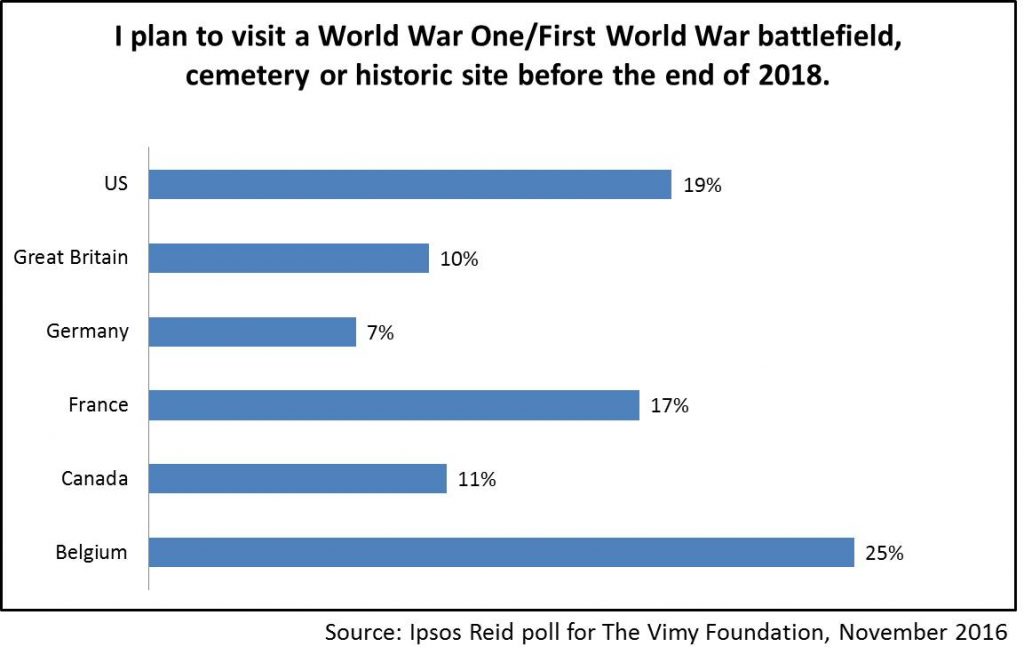 Each Wednesday we will highlight the women of the First World War. Today:

Similar to the Imperial Order Daughters of the Empire, the Young Women’s Christian Association (YWCA) worked to send parcels to troops overseas and raise funds for War Bonds. Due to the extraordinary measures of the war, the Canadian government made the unusual motion of requesting the assistance of charitable organizations in administering the war effort. Consequently, the YWCA undertook tasks such as assisting female munitions workers find  housing (as they were often displaced in order to meet the labour demands of the war effort). The YWCA also developed and supervised the female farming camps established for labourers that moved into the country to work the fields. After the war, the YWCA provided assistance to war brides arriving from the United Kingdom.

Each Tuesday, we will feature a place in Canada (or international!) with a Vimy Ridge connection. Today we highlight:

Last week we were introduced to the Imperial Order Daughters of the Empire (IODE), a women’s organization that worked to care for troops overseas and raise funds for the war effort on the home front. In the years following the First World War, the IODE strove to have the sacrifices of Commonwealth troops remembered in their communities. In Canada, the IODE championed the creation of Roads of Rememberance. More commonly known as “Memorial Avenues”, they were meant to echo the tree-lined roads of rural France, seen by the Canadians while overseas. The straightest possible avenue of a community was chosen, which was then lined with planted trees in perfect symmetry. Each tree was then specifically dedicated with a bronze plaque to a fallen son of the First World War. It is believed that the Next of Kin Memorial Avenue in Saskatoon, Saskatchewan is the last remaining Memorial Avenue in Canada to retain its original integrity. As such it has been dedicated as a National Historic Site of Canada.

Each Monday, we will share a brief biography of a soldier of the First World War with a Vimy connection. Today we honour: Francis Pegahmagabow.

Francis Pegahmagabow, MM & Two Bars, was an Ojibwa of the Parry Island Band in Ontario. Orphaned at a young age, at 12 years old he worked at lumber camps and fishing stations. Pegahmagabow enlisted on August 14, 1914 with the 23rd Battalion (Northern Pioneers). Transferred to the 1st Battalion (Western Ontario), he arrived in France in February of 1915. At the front, “Peggy”, as his fellow soldiers called him, displayed exceptional skill as a sniper and scout. By war’s end, “Peggy” was credited with 378 kills and the capture of over 300 enemy soldiers.

Surviving the war, he had served at nearly every major battle of the Canadian Expeditionary Force. His exploits on the battlefield became legendary, and Pegahmagabow was one of only 39 Canadians to receive a second bar to the Military Medal.  Returning home, “Peggy” became heavily involved in First Nations politics, alternatively serving as Chief and Band Councillor of the Parry Island Band.  In 1943 he became the Supreme Chief of the Native Independent Government, an early First Nations institution.

In 2016, a life-sized statue of Pegahmagabow was erected in Parry Sound in tribute to the most highly decorated First Nations soldier and the deadliest sniper of the First World War.

The competition process for Canada’s First World War memorials was overseen by the Canadian Battlefields Memorials Commission. In total, 160 drawings were submitted, of which 17 were chosen for further consideration. Despite his design being chosen in 1921, at the time, Walter Allward had not yet even decided which stone he wished to use for the memorial. Upon receiving the Commission’s approval, Allward embarked on a two year journey to find the preferred stone. In an old Roman quarry of Yugoslavia, Allward found the Seget limestone he desired. Six thousand tons of it would travel by water to Venice, where it was then shipped by rail to the site in France. The Canada Bereft figure alone was cut from a single block weighing twenty-eight tons.

In April 2016, Keaton McLean participated in the Vimy: Canada’s Coming of Age week at Encounters With Canada in Ottawa. Reflecting on his experience, Keaton wrote: “Being at the Vimy: Canada’s Coming of Age week made me realize how privileged I am to live in this country and has made me much more grateful for what the brave men and women did for us all those years ago.”

Each Friday, we will revisit an interesting poll result from the past few years. How do you compare to other Canadians? See our past poll results here: (http://www.vimyfoundation.ca/learn/poll-results/)

As noted in our poll last week, centennial anniversary commemorations of important First World War milestones have been ongoing across the world since 2014, and will continue late into 2018. In light of these numerous events taking place, a November 2016 poll found that one quarter (25%) of Canadians say they’ve attended a war remembrance ceremony in the past 12 months, while fewer residents of Great Britain (18%), the USA (16%), Belgium (14%), France (11%) and Germany (4%) say the same. 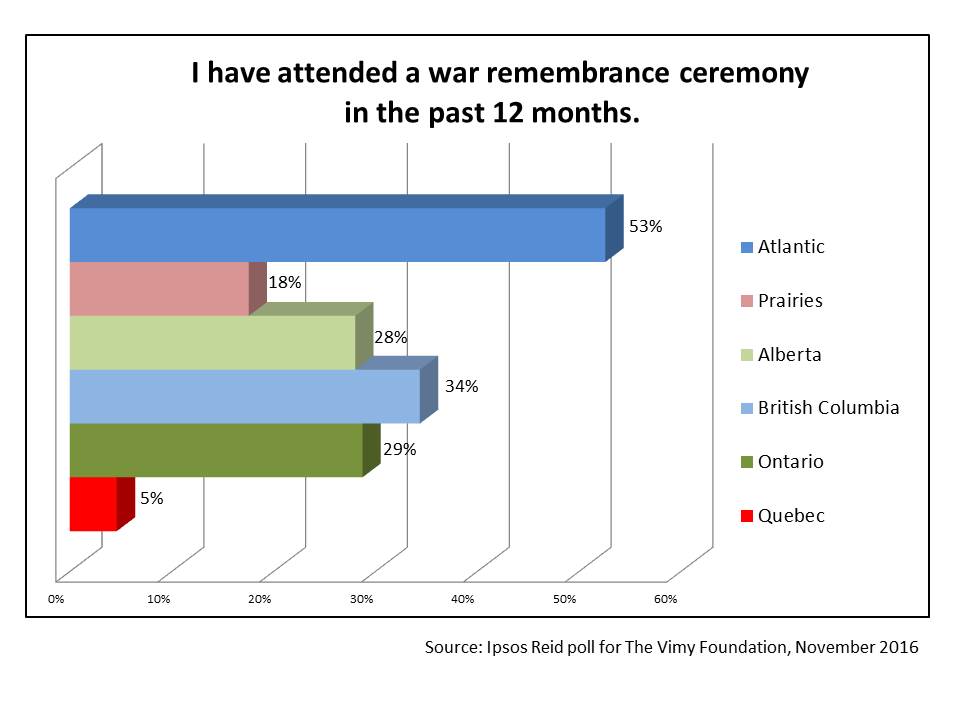