Upon arriving in Europe, the Vimy Pilgrims boarded trains and proceeded to their respective cities, from which dozens of tour busses would shuttle pilgrims to and fro across Belgium and France. Each Pilgrim was able to request  a specific battlefield tour they wished to complete. This would ease the strain on the dozens of small towns that simply could not host 6,200 visitors at a single moment. In addition to this, Pilgrims could request special cemetery visits, enabling them to visit specific graves of loved ones. In total, 1,400 Pilgrims requested a special cemetery visit, totaling over 300 sites. In a remarkable indication of reverence, each of these 1,400 requests were fulfilled by the travel agencies.

The Pilgrims were no doubt the toast of Europe at the time. Despite their small size, villages and hamlets liberated by the Canadians clamoured to host a ceremony and parade for the returning Pilgrims. In London, the Pilgrims paraded to Westminster Hall for a massive ceremony at the Tomb of the Unknown Soldier. A garden party at Buckingham Palace was attended by King Edward VIII, who mingled and chatted with the Pilgrims.

After the official Pilgrimage ended, the 5,000 Pilgrims who accepted the French Invitation were treated to extravagant receptions in larger cities such as Rouen and Blois, where boisterous banquets often crescendoed with chorus rounds of “Tipperary” to the delight of the French crowds. At Paris, the Pilgrims paraded through cheering throngs to receptions at the Hotel de Ville and Hôtel des Invalides. 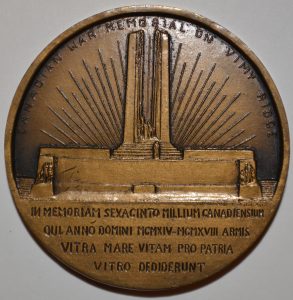